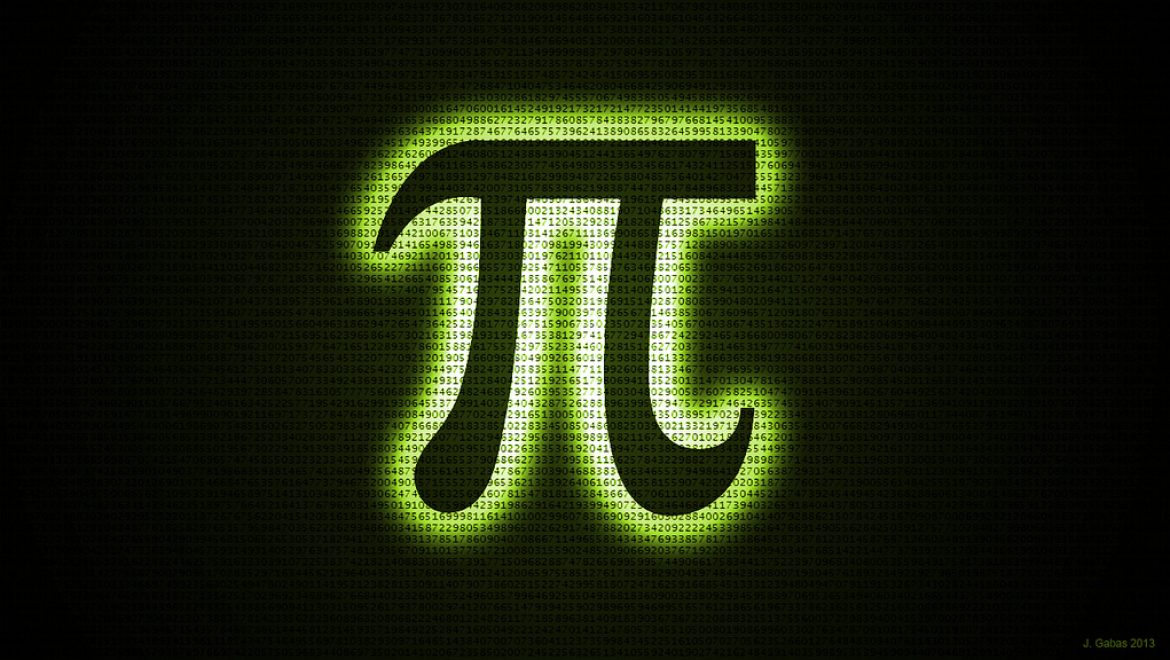 The ratio between the circumference of the circle to its diameter, called “pi,” equals 3.14159265359 (approximated to 11 digits after the point). Pi was well-known to the Greek philosophers: in the 3rd century BCE Archimedes calculated it as 3.14, and in the time of the early Mishna Sages (1st century CE) Heron of Alexandria reached the precision of 3.14159.

But what did Chazal know about it?

In Tractate Eruvin 14a it says, “Anything which has, in its circumference, 3 tefachim, has one tefach in diameter. How do we know this? Rabbi Yochanan said, the Scripture states, ‘And he made a molten sea, ten cubits from one brim to the other. It was round all about, and its height was five cubits. And a line of thirty cubits circled it.’ But what about its edge (which would make its circumference larger than 30)? Rav Papa said that its edge was as thin like a rose petal. But still we have to subtract something [the width of the edge]? [No,] for it was calculated from the inside,” that is, the circumference of 30 is the interior side and not the exterior.

This Gemara clearly proves that Chazal understood the relationship between diameter and circumference to be a factor of three exactly, for if not so, the Gemara would not ask, “still we have to subtract something,” for really the circumference should have been more than 31 cubits, and the Tosfot on those words wondered: “it means that the calculation is exact…and it is a question, for the calculation is not precise according to the scholars of measurement.”

And we will bring a proof from a matter of halacha, from the Shulchan Aruch, Laws of Succah, section 634, paragraph 2, “If it [the succah] is round, there must be within it enough to square seven by seven [tefachim].” The Mishna Brura wrote, in section 4, “And a string which can encircle twenty ninetefachim and two-fifths can square within it seven by seven.” In Shaar HaTziyun it explains that all which has in its diameter one tefach has in its circumference three tefachim.

According to the calculation of Pythagoras’s rule and the relation of circumference to diameter, the circumference should have been about 31tefachim, so if we follow the Mishna Brura’s ruling, we will sit in an invalid succah!

And so the topic of the width of a round log (to allow moving things from place to place in an alley); its width must be a tefach, as Chazal said in Eiruvin 13b, in the Mishnah, “anything which has in its circumference three tefachimhas in its diameter a tefach.” Here they were lenient and did not fear an addition, for if it has a circumference of three tefachim, its diameter is less than a tefach.

We will return to the Sea of Solomon, about which Rabbi Chiya said, in Eiruvin 14a, “The sea which Solomon made held one hundred fifty mikvaot of purification” (a mikveh holds 40 seah). Based on calculation this does not seem right; the Gemara concluded that the Sea of Solomon was square below for three cubits and the upper two cubits were round, as is written, “it will hold 2000bat” (a bat is three seah) — so we find that it holds 150 mikvaot. The words of Chazal are most peculiar, for why did the Scripture, which detailed the form of the Sea of Solomon so specifically, hide from us as important a detail as the bottom being square to a height of three cubits? But still, even this is an error, for calculating precisely we would find there more than 152 mikvaot.

From all said above it is clear that Chazal erred in a matter as basic as the relation of the circle’s circumference to its diameter and were not aware of it at all. In the Responsa of the Tashbetz, part one, section 165, even though he wanted to uphold the words of the sages, he had to admit explicitly that the disciples of Rabbi Yochanan erred in the matter, “It is impossible to say that none of them could achieve what Euclid and Archimedes achieved…so we say that what was written about a succah made as a furnace (Succah 8a) was not strictly precise, but these are the words of disciples who did not understand Rabbi Yochanan while Rabbi Yochanan said his words based on engineering precision.”

The Rambam’s opinion in his explanation of the Mishnayot in Eiruvin chapter one is, “You should know that the ratio between the diagonal of the circle and the line around it is unknown and one can never really tell, and this failing is not due to us…and the closest example upon which the learned sages rely is the ratio of one to three and a seventh…According to this one never will achieve more than an approximation. They took this into account and said that anything which has a circumference of three tefachim has a diameter of onetefach and relied upon this whenever they needed a measurement from the Torah.”

And those who understand will see here the Rambam’s sly trick: since that pi is a number which cannot be precisely calculated (an irrational number), Rambam uses this fact to approve the abandonment of the significant digits of pi altogether. What is this like? A person who has no second hand on his watch — so he abandons the counting of minutes also, and rounds up the time to the last full hour…

According to Rambam, Chazal knew their math but took a rounded-off number required in the Torah (which does not demand precision). This contradicts the words of the Gemara in Eiruvin and Baba Batra, brought above, for there they dealt with  matters of reality which, were the true value of pi known to the Sages, would provoke no questions at all.

Contemporary believers whose faith relies on the wisdom of Chazal and their astonishing knowledge of science find it difficult when they uncover the ignorance of Chazal on an issue known to Archimedes, who lived c. 300 BCE, and of whom the Encyclopedia Hebraica says, “It is an enigma to this day how Archimedes could extract the square roots required for this amazing precision.” They have no choice but use an ornamental and charming calculation which only with a second look can you find the fraud. This is the essense of their “discovery”: in the verse which says, “and its line was 30 cubits” (with the written kavah read kav), they divide kavah, 111 in gematria, by kav, 106 in gematria, multiply it by three, and get 3.1415094, which is close to the true value of pi (which is, as said above, 3.1415926).

But what about the fraud? It is clear to everybody that only after you know the true value of pi can you find it “hinted” in this verse. One who already knows the value of pi will be able to “find” it in the verse, but one who does not know (e.g. that he has to multiply by 3), will search forever and find nothing in that verse.

Thus those empty people go and turn our rabbis the Tanaaim and Amoraim, the Gaonim, Rishonim, and Achronim, into men who did not know the Torah’s secrets; only in our generation do we “discover” pi in the Scripture, while all the Sages did not manage to find the hint in the verse, so they ruled the Halacha based on an invalid calculation.

And if a speck of intellectual honesty and inquiry for truth remains in your head, you  will see that this “hint” is accidental only, and those who wrote the Scripture did not intend it at all.

The meaning of the word kav is a measuring rope, and so it is written in Ezekiel 47:3, “As the man went on eastward with a measuring rope [kav] in his hand, he measured off a thousand cubits.” The Metzudat David explains “kav is a measuring rope,” and so, too, did Rashi explain on Joshua 2:18, “Length of crimson cord: from the language of measuring line and rope,” and Radak explained the reason for the kri u’ktiv difference on Jeremiah 31:38, “It is writtenkavah with a hey for this is feminine language, like the length of crimson cord, and is usually read kav.” This kri u’ktiv is also found in Zachariah 1:16, so thiskri u’ktiv is found in three places. What will they do with the hints written in Zachariah and in Jeremiah, where there, too, is a kri u’ktiv, but there it is not spoken of a circle–perhaps they will multiply the words instead of dividing them? (And if they multiply the values, they will get the number 11766, which is a wonderful number, for the sum of its terminal digits on both sides is always 7 [6+1], just as is the middle digit, and it is certainly a marvelous hint at something — all that is left is for one of those empty people to come and invent up the story.)

But the reason for kri u’ktiv is given by Radak on II Samuel 15:21, “And these words, which are written and not read or which are read but not written, and those which are read one way but written another — it seems that though the books were lost and confused in the first exile, and the sages who knew the Scriptures died, and the men of the Great Assembly who returned the Torah to its previous luster found disagreements in the remaining books and followed the majority thereof, according to their opinion. And where they could not completely clarify the matters, they wrote one thing and did not add vowels, or wrote in the margins and not inside the text, or wrote one in the margins and a different word in the text.”

The matters are explained perfectly; the sages were uncertain if the word kav were masculine or feminine so they wrote it one way and read it another.

And you, the reader, who seeks for the truth: choose you a straight and sure path  — the clear and honest plain meaning of the words. Follow the way of observation, inquiry and reason. And do not depend on empty people who rely upon gematriot and hints our rabbis never thought about, for those empty people will always fear knowledge and flee the truth, reality and reason being difficult for them. But you — follow the way of the reason, and then you will be awarded with the truth. 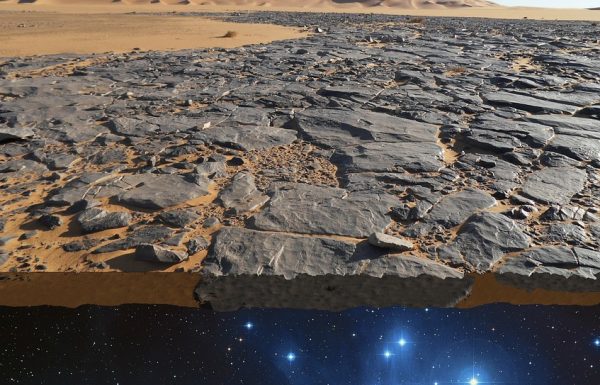 What the Sages Knew About the Shape of the Earth

We will show that the Sages thought the earth was flat and covered by the dome of the sky, that it is the center of the solar system, and that the sun revolves around it. 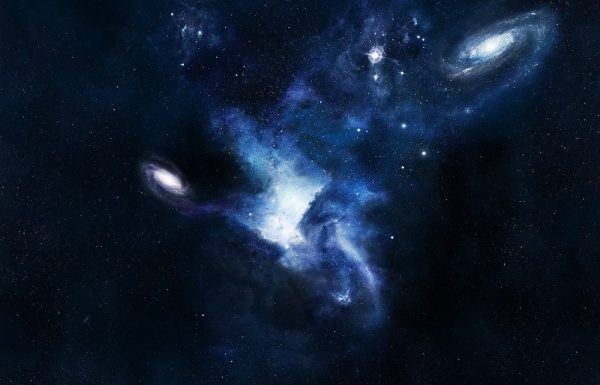 The knowledge of the Sages on the structure of the world

The dome of the sky, which includes windows to that the sun may rise and set through them, the 7 firmaments above each other, and above them all -- G-d.