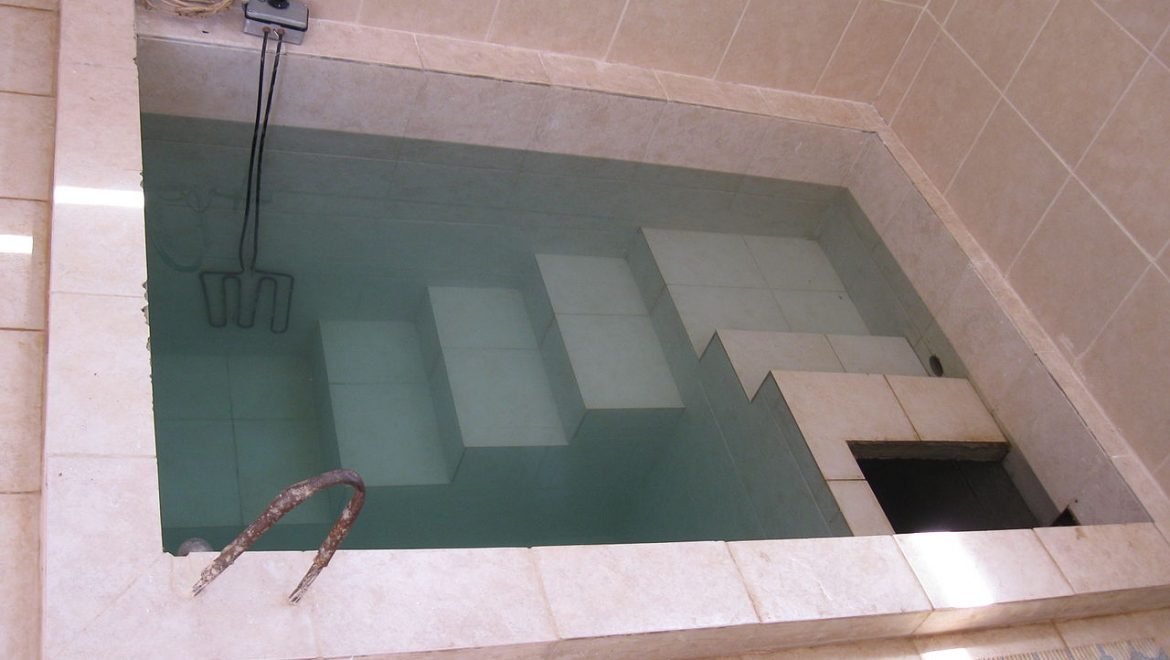 “When she becomes clean of her discharge, she shall count off seven days and after that she shall be clean” (Leviticus 15:28)

The portion of Metzora is 90 verses long, of which 57 deal with themetzora and an infected house, 15 verses deal with a person giving off a discharge, 3 verses deal with seminal emissions, and 14 verses with the niddahand her discharge. All the verses speak of laws of impurity and purity which are not relevant when the Holy Temple has been destroyed and lays desolate, and they have no application nor fulfillment in our days (aside from the ritual bath of the niddah, about which see below). It seems that the holy one, blessed be He, who “had the Torah in his lap thousands of years before the creation of the world” knew and expected that the first and second temples would exist only a few hundred years out of all the thousands of years of the world, yet He still went on at length on details which were relevant only for a short while. Not only that, but He wrote the section about afflictions which, according to several Tanaim, never actually had a practical application, as they say in Tractate Sanhedrin 71a: “As the Bereita says: ‘The afflicted house never was and never will be. Why was it written? So you should learn it and receive the reward.” In their opinion G-d knew from the start that there never would be an afflicted house, and even so wrote in His book: “When you enter the land of Canaan that I give you as a possession, and I inflict an eruptive plague upon a house in the land you possess…” though He knew it would never actually happen! So a man writes and means something by it; He, may He be blessed, writes and does not mean anything by it. And why did He write it? So that the people of Israel would read it (this thing that never was and never will be) and earn reward for the reading.

Again we see that G-d expands on things which never were and never will be, and is brief in those matters which are relevant at all times and everywhere. Where did he speak briefly? In the laws of a niddah‘s purity for her husband.

Look and see that the Torah does not write at all that a niddah must immerse herself to be purified. It would have been enough to add a few words: “and wash in water,” to make it: “When she becomes clean of her discharge, she shall count off seven days [and wash in water] and after that she shall be clean.” Then we would not reach the confusing stage of our rabbis the Rishonim. The Tosfot write, on Tractate Yoma 78a, “They asked R’ YehudaGaon where in the Torah it obligates a niddah to immerse herself. He answered that it was learned from a minor premise to a major one; from the one touching her. Rabbeynu Tam learns it from what is written, ‘in the waters of lustration’ (‘b’mey niddah‘–Numbers 31:23), and explained it with what is written in Tractate Avoda Zara (75a), ‘the waters in which a niddah immerses herself’.’ Rabbi Yitzchak learned it from ‘And she who is in her state of niddah‘ and explained it from the sixth chapter of Tractate Shabbat (64b): she will be in her state of niddah until she’s been in the water.”

We look at the learning of the Rishonim and ask where they learned that a niddah needs immersion to be allowed to her husband–it seems quite clear that they did not receive this from Sinai but concluded it based on their own learning and deduction. And from this we can draw conclusions about the learning of Chazal themselves; they quite simply did not get this from Sinai, either.

The second explanation, by Rabbeynu Tam, he learned from “from the water of lustration.” Come see something odd: Where do we learn about a woman’s immersion? From the vessels which the Jews took as booty from their gentile enemies, as written in Numbers 31:23, “Any article that can withstand fire, these you shall pass through fire and they shall be clean, except that they must be cleansed with water of lustration; and anything that can not withstand fire you must pass through water.” Not only is the plain meaning of “waters of lustration” as the Rashbam puts it: “the waters of lustration from the red heifer, to purify them from death impurity” (and what is the connection between the red heifer and a ritual bath?), but Chazal’s explanation  has changed the waters of lustration into the waters of the ritual bath in Tractate Avodah Zara 75b: “Waters of lustration: that water in which a niddah immerses.” This explanation, according to several Rishonim, is nothing more than mere allegory, for the immersion of vessels taken from gentiles is not a matter of Torah. As Nachmanides wrote on Numbers 31:23, “My heart’s feeling is that this immersion [of vessels] comes from their own words, and they found in the Scriptures an allegory for that.” This is also the opinion of Maimonides in The Laws of Forbidden Foods, chapter 17, law 5: “This immersion, in which they immerse table utensils taken from the gentiles and then they are permitted for use in eating and drinking, comes not from matters of purity and impurity, but is the words of soferim.” Therefore one cannot learn from the immersion of vessels taken from gentiles (which is not stated explicitly in the Torah) that the immersion of a niddah comes from the Torah. (It might be said that if there is no issue of vessels taken from gentiles, then this verse relates to niddah; but this idea would make any reasonable person laugh.)

And where did Maimonides learn that a woman requires immersion to be permitted to her husband? He writes, in the Laws of Forbidden Sexual Relations, chapter four, halacha 3: “But a niddah, a woman with a discharge, and a new mother, none of whom have yet immersed in a ritual bath–one who lies with them, even several years later, is punished by  having his days cut short. For the Torah mandates immersion, as is written, ‘they must pass through water’ [Leviticus 15:18; that verse speaks of one who has had a seminal emission]. This is a chief precept for all impure, that he shall be impure until he has immersed himself.” Chief precepts are one of the 13 ways in which the Torah is elucidated, but on this issue it is not mentioned at all in the Gemara (The Magid Mishneh says it comes from the Sifra, but we have not found it even there).

Come see another thing which the author of the Torah caused us in going on at length on the less important and speaking in brief about the main part. Our rabbis disagreed about whether, for a ritual bath according to the Torah, 40 se’ah of water is enough, and whether it can be straight from the tap. According to Maimonides, Laws of Ritual Baths, chapter four, halacha two: “It is from the words of the soferim that tap water invalidates for immersion.” His opinion is that they are valid according to the Torah. This is also the opinion of Rabbi Yitzchak in the Tosfot on Bava Batra 66b: “And it seemed to Rabbi Yitzchak that even if it all was from the tap, it is acceptable according to the rabbis.” According to the greatest Rishonim a woman whose house has a bath a half meter by a half meter in size may immerse in it and fulfill her obligation from the Torah! (And therefore all the high and mighty things that our rabbis said about a separate ritual bath fall by the wayside.)

But this is how the Torah ought to have been written to remove debate: “When she becomes clean of her discharge, she shall count off seven days andwash in 40 se’ah of water not drawn from a tap, and after that she shall be clean.”

What a shame, to leave out a few words which would have settled problems, and to go on at length about a metzora and an afflicted house and to duplicate whole chapters of the building of the Tabernacle, to go on at length about the foot washing of the servants and the negotiations for the purchase of the Cave of the Patriarchs, and many other texts. Our rabbis have already hinted about this puzzle in the Mishnah in Tractate Hagigah 10a: “Release from vows wafts in the air and has nothing to rely upon; the laws of Sabbath…are as mountains hung by a hair, for there is little in Scripture about them, and many halachot.”

We will conclude with the laws of a person with a discharge, who must bring two sacrifices: one a sin-offering and one a burnt-offering. These things make no sense to a twenty first century person : Why should a sick person have to bring a sacrifice? For who is a person with a discharge? Rashi wrote on Leviticus 15:2: “The flux resembles the water of barley-dough and it is dissolved, similar to the white of a defective egg [of which a chick cannot be born]; semen is thick like the white of a non-defective egg.” See also the entryzivah in the Encyclopedia Hebraica and see that it is an inflammatory, pus-producing disease known since ancient days, from the 16th century BCE (mentioned in the Ebers papyrus); Hippocrates described this illness.

Instead of sending the patient to a doctor for treatment, we obligate him to bring sacrifices. Nachmanides wrote on 15:11, “The reason for the impurity of a man with discharge is that this is one of the most serious inflammatory diseases, and he must praise G-d for healing him and purifying him, and he must bring a sin-offering to atone for his sins, so that he may not fall ill again.” Based on this reason of Nachmanides, everyone who is seriously ill and recovered should bring two sacrifices, not just the person with a discharge.

And if you look carefully and honestly, you will see that the Torah attributes things to the person with a discharge beyond illness, for it considers him impure and requires him to immerse in a ritual bath and bring sacrifices and other ritualistic acts. The origins of all this is in fear of disease and ancient superstitions which held that illness is an unnatural and mysterious phenomenon. We have found the same thing about menstruation; see what we wrote on the matter in Pamphlet 7. 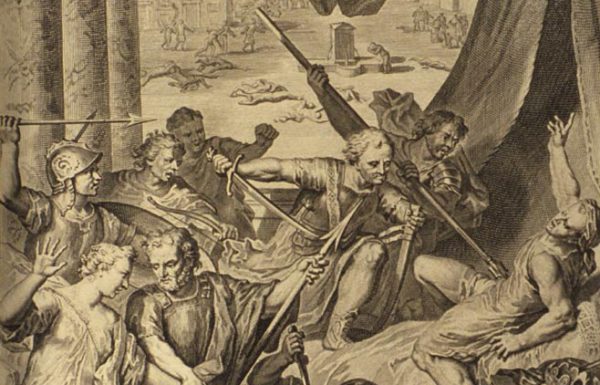