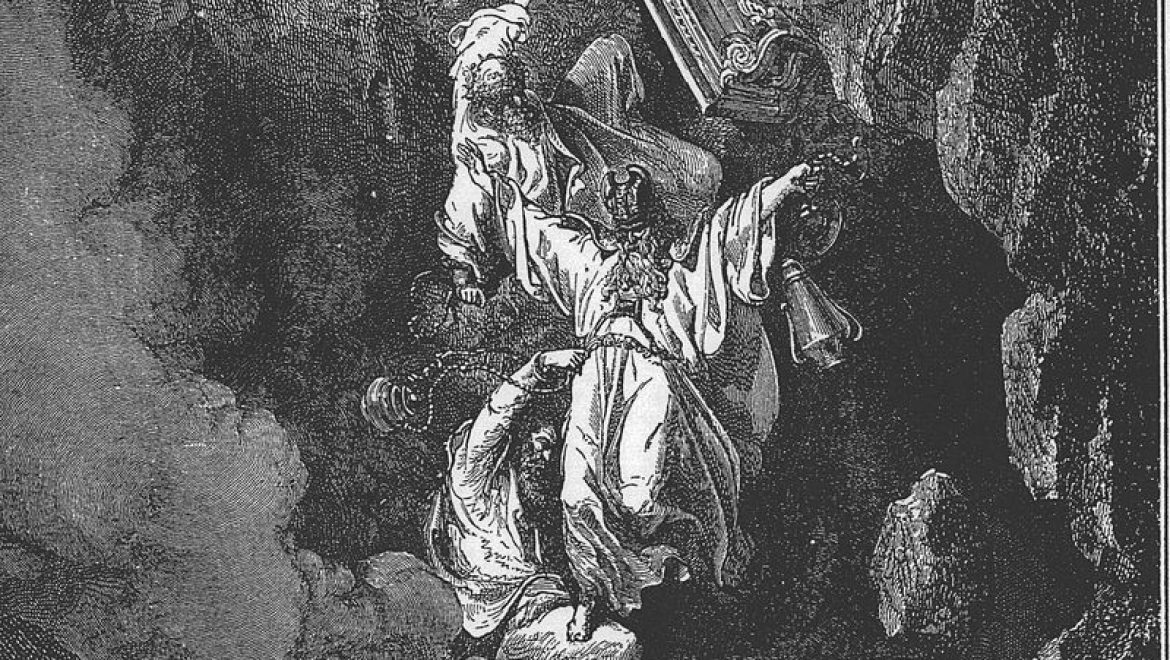 “Everyone who ventures near the Lord’s Tabernacle must die. Alas, are we doomed to perish?” (Numbers 17:28)

When did the events described in the portion of Korach take place? According to the chronology of events, it should have happened immediately after the incident of the spies, as written in the midrash Seder Olam Rabba (chapter 8): “[The children of Israel] went from Hatzeroth and came to the wilderness of Paran on the 28th of Sivan, and on the 29th of Sivan Moses sent out the spies… And they returned from exploring the Land at the end of 40 days… and it was the ninth of Av… and after the spies, there was the quarrel of Korach, and the ground swallowed him.” And so it is written in Seder HaDorot, too.

Based on this, it is very puzzling why the children of Israel in our portion complained that any who approach the Tabernacle would die, and then the holy One, blessed be He, warns them against approaching the Tabernacle: “All the work of the Tabernacle…any outsider who encroaches shall be put to death” (Numbers 18:1-7). Had the Scriptures not already warned them about this before they began their journeys in the desert? The dominion of the Levites and the priests was minutely detailed by the Scriptures and the children of Israel were explicitly warned: “The Levites, however, shall camp around the Tabernacle of the Pact, that wrath might not strike the Israelite community” (Numbers 1:53). The Rashbam emphasized this chronological confusion, writing in his commentary on Numbers 17:27, “Any person who approaches the Tabernacle to guard it or to the vessels of the Tabernacle with the Levites will die, for G-d had not yet warned them [about it], as it had not yet been written ‘and the stranger who encroaches shall be put to death’.”

“You shall make Aaron and his sons responsible for observing their priestly duties, and any outsider who encroaches shall be put to death.” (Numbers 3:10)

“Those who were to camp before the Tabernacle, in front–before the Tent of Meeting, on the east–were Moses and Aaron and his sons, attending to the duties of the sanctuary, as a duty on behalf of the Israelites; and any outsider who encroached was to be put to death.” (Numbers 3:38)

When he said what he said, was the Rashbam hinting at his true opinion about the order of these events?

Ibn Ezra, who also noticed the chronological disorder, does not hide behind hints and explicitly states, on Numbers 17:27, “Then G-d said to Aaron that he was chief over the tribe of Levi, to warn him that the Levites should not entrap the people of Israel…This portion, too, is a sign that the events in the desert of Sinai happened when the Tabernacle was erected and the Levites were chosen.” Thus he wrote on Numbers 16:1, “And Korach took–this happened in the desert of Sinai when the first-born were replaced and the Levites separated.” We find that two Torah greats voiced their opinion about the errors in the chronological order of the portions, each in his own way. The Rashbam hinted and Ibn Ezra announces aloud that the author of the Torah once again mixed up the order of events in writing the portion of Korach after the incident of the spies. (And about the chronological order of world events which is accepted by religious Jewish public we will release a special essay and show that all this chronology is virtual, with no connection whatsoever to reality.)

Another thing duplicated in our portion is the section on the redemption of the first born. “The first issue of the womb of every being, man or beast, that is offered to the Lord, shall be yours…take as their redemption price…” (Numbers 18:15)

We will point out, incidentally, that the Hezkuni writes on Numbers 18:16, “Every first issue of the womb–this section came down to teach of the redemption of impure animals.” His words are puzzling, for there is no commandment to redeem impure animals aside from the first issue of the donkey, as Maimonides wrote in the Laws of the First Born, chapter 12, halacha 43, “The impure animal mentioned here is only the donkey.” It is not redeemed by five selaim, but by its equivalent price, as Maimonides wrote in halacha 11, “If there is no sheep with which to redeem it, redeem it for its [the donkey’s] equivalent price and give the money to the priest. The Torah did not say ‘a sheep’ to be more stringent, but to be more lenient.”

Another thing is that in our portion, in Numbers 18:14, it says: “Everything that has been devoted in Israel shall be yours [the priest’s]” while in Leviticus 27:28 it is written “Every devoted thing, that a man shall devote to the Lord of all that he owns, both of man and of animal, and of the field of his possession, may not be sold or redeemed; every devoted thing is totally consecrated to the Lord.” (What is ‘devoted’? It is when a person makes, on his property or on a person, the vow, “This is devoted.” There is also a way to conditional devotion, if one says, “If such-and-such comes to pass, then this property or this person will be devoted.”)

How do our Rabbis settle the conflicting verses? In Tractate Erchin 29a, “Devoted things, as long as they are in their owners’ homes, are as a treasury of the Holy in all aspects, as it is said, ‘it is totally consecrated to the Lord.’ [But] when he gives those things to a priest, they are as ordinary things, as is said, ‘everything that has been devoted in Israel shall be yours’.” This is pushing it and is very far from the plain meaning of the text.

We, who wish to learn the ways of the Torah, will not let go of the plain meaning of the text. As Baruch Spinoza, the greatest of Jewish philosophers, wrote in “Theological-Political Treatise”: “All acquaintance with the Scriptures must be sought only from within itself.”

But what is the meaning of “totally consecrated to the Lord” in relation to that which is devoted? Come hear something awful which we learn from the Scriptures about the customs of our fathers, in Leviticus 27:19, “Each one devoted, which will be devoted of men, may not be redeemed; he must be surely be put to death”!

We find that our forefathers would devote people to the Holy treasury, and those who were devoted were sentenced to die!

Rashi explains the verse: “He who goes out to be put to death and one says: ‘His valuation I take upon myself,’ his words are not valid….since he is going to his death and therefore he cannot be redeemed–he has no price and no valuation.” See how shamefully Rashi emasculates the text. The general punishment “he shall be put to death” becomes “one person who was sentenced to death and is on his way to the execution.” The commandment “may not be redeemed” becomes, in Rashi’s commentary, “since he is on his way to die, he has no redemption valuation.” The general commandment “each one devoted” becomes a private and rare instance of one who is sentenced to death and is just before his execution. There is no end to the emasculation of the Scriptures just to keep our Torah from looking like the law book of wild men. But woe to him who does this, for one who distorts the language and prose to suit his views will in the end emasculate the text and distort factual reality to keep it from contradicting the Torah in anything. See pamphlets one and threeabout this issue.

Also look in Nachmanides’s commentary on Leviticus 27:19; we will bring the content of his words and the reader shall shake at what his ears hear.

After the terrible incident of the concubine in Givah the tribes of Israel swore: “Anyone who did not come up to the assembly before the Lord in Mitzpah would be put to death…not one of the inhabitants of Yavesh-Gilad was present…This is what you are to do: Devote every man and every woman who has known a man carnally” (Judges 21:5-12).

Exactly as written in the Torah did our forefathers act in the time of the judges. A vow of devotion was made, and based on this vow they rose and killed the men of Yavesh-Gilad and all the women who were not virgins. Despicable mass murder. Woe to the ears which hear this.

Another example: King Saul, before going out to battle, vows (I Samuel 14:24-46): “Cursed be the man who eats any food before nightfall.” Jonathan did not hear this and ate honey, “Jonathan, however, had not heard his father adjure the troops…he put out the stick he had with him, dipped it into a beehive of honey and brought his hand back to his mouth.” And what was his fate? “Saul said, ‘Thus and more may G-d do: You shall be put to death, Jonathan!” Saul vowed and proscribed to death any who would eat; even when he found his own son, Jonathan, eating, he would have put him to death.

A third example of this custom of our forefathers in Biblical times, which supports our words, is that before going out to battle (or for any other reasons) they would devote people and sentence them to death. Jephthah, before going out to battle the Ammonites, made a vow of devotion (Judges 11:30): “Whatever comes out of the door of my house to meet me on my safe return from the Ammonites shall be the Lord’s and shall be offered up by me as a burnt offering…there was his daughter coming out to greet him…he did to her as he had vowed.”

Nachmanides, who was not disturbed by this despicable act, wrote: “Therefore I say that it is from this verse (“Each one devoted… must be surely be put to death,” Leviticus 27:29) that we learn that a king of Israel or a Great Sanhedrin, before all of Israel, have the authority in law to devote a city and declare war against it, and if they devote anything, one who disobeys shall be punished by death.” According to Nachmanides, it is enough that the Sanhedrin be permitted to devote anything for any reason, and one who breaks this devotion may be killed without a law court or witnesses, without warning, despite that without the last two there is no sentence of death by a court of law.

This is an answer to those who say Divine morality in the Torah is better than human morality (and to their claim that human morality changes while Divine morality is established forever, etc., etc.). We ask: What is the benefit of morality established forever if it is immoral? For those who believe in the word of G-d there is only a hair’s breadth between “do not murder” and “do murder.” The Scriptures allow you to kill to fulfill a vow of devotion, even if there is no justification nor moral reason for this bloodshed. What was the sin of Jephthah’s daughter? The men of Gilad who did not want to go out to battle against the tribe of Benjamin–how did they sin? Their wives certainly could not go out to war–what was their sin? Is a vow others took to kill them enough for Jewish law to make murdering them permissible? What sort of law is this?

Human morality is a thousand times better, change as it will, than this sort of Divine morality. 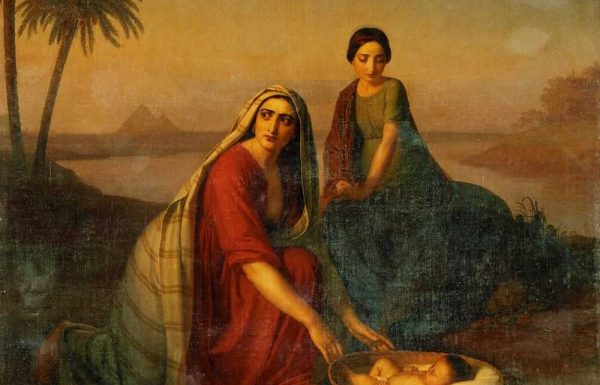